Like many – probably more than care to admit – I am not a fan of recoil.  Though I learned to shoot on a Lee-Enfield .303 in the days before muzzle breaks were even invented and I accept it is a fact of physics, recoil nevertheless – at least for me – is detrimental to down range accuracy. I’ve also observed that recoil also has the potential to induce the dreaded flinch in newer shooters which is an affliction that, like the ‘yips’ in golf, once acquired is hard to break.

If I lived in the USA  I would probably fit suppressors which reduce recoil and moderate sound )  to many of my rifles but in Canada and in the name of ‘public safety’ our political masters have decreed that all sound moderation devices are a threat to national security or some such other nonsense and so, even unlike such gun-unfriendly places as the UK, suppressors are a prohibited item which means that I double up on hearing protection and fit brakes to nearly all my rifles.  In fact a check shows that outside of milsurp collection only my F-Class match rifles and a M40A1 clone remain un-braked.

Over the  years I have tried a number of brakes and I’ve found that generally I have a preference for those easily removed for cleaning rater than the gunsmith installed ones and so when Insite Arms of Alberta were building my new custom in 6xc I asked that they install one of their user-removable ‘Heathen’ brakes.

My 6xc with Heathen Brake

I hadn’t used the Heathen before and I was very impressed with it from the very first shot so I thought I would drag out some comparable rifles with other brakes to conduct some tests side by side.

Now is the time to say that I don’t have any science background nor do I possess any scientific measuring tools.  If you like that kind of stuff them my friend Cal Zant at the Precision Rifle Blog is your man – Cal wrote a brilliant analysis of brakes and his article can be found here: http://precisionrifleblog.com/2015/06/24/muzzle-brakes-field-test/

For the two or three readers left following this article I figure that a brake has to do a few things well:  it has to manage felt recoil; it cannot be so loud as to be painful; it should allow for the shooter to stay on target for follow up shots and it ought not to create a cloud of dust to put a sandstorm to shame.  It was against these benchmarks that I measured the brakes I own – on that note, I own all the brakes and rifles referred to in this article and no person or company has loaned or paid me anything to do this. ( I wish they would – I like free stuff ! )

Choosing the rifles – I wanted to keep the test as much apples to apples as possible so I chose rifles chambered in the 6mm and 6.5 mm category.  This decision meant that a couple of brakes were not included since they are on rifles of harder hitting calibres so the older style PGW brake pictured below on the left and the beastie on the right were not included as they sit on a .308 and .338 Lapua Magnum respectively whereas the one in the middle made the cut ( sits on a .260 Rem ).

Other Brakes Not Tested 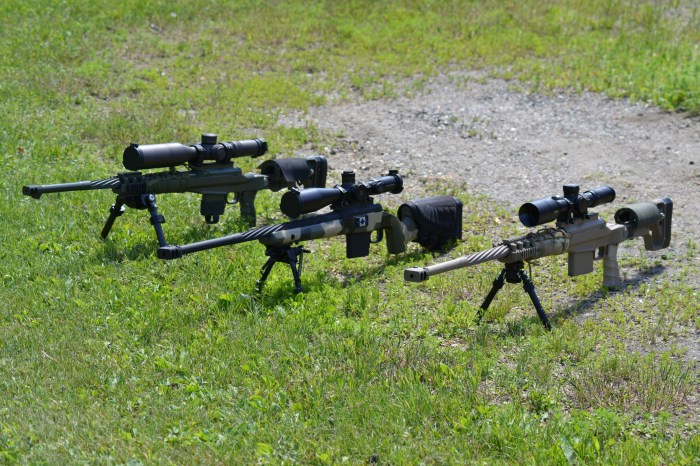 Likewise some gunsmith installed brakes didn’t make the cut like the ARTS gill brake pictured at left below.

What remained from the culling were four brakes on four comparable rifles:

I did the shooting on a dry day off the prone with bipod and rear bag and on a dusty road with some grass, sand and pebbles to be kicked up.  I shot each rifle with the brake and then again without and compared felt recoil, noise, my ability to stay focussed on target and dust signature.  I made notes after each round of shooting and those notes formed my observations below.

I love PGW stuff and clearly I’m a fan of their rifles and the PGW brakes have  worked well for me on the older Coyote in .308 and the Timberwolf in 338 Lapua.  Personally I prefer the aesthetics of the older PGW brakes but the newer ones which follow the style used on the Timberwolf certainly look ‘beefy’ and tough and many users will like that look.  Easy to remove and reinstall, I figured the PGW brake to cut recoil in half.  It did increase sound but not uncomfortably and the rifle remained nicely on target though there wasn’t a big difference as this ( like the others ) are heavy rifles and they don’t move much.  It seemed to produce a bit more blast / dust signature than the others but not by a lot and certainly not to the point of being a problem.

It is worth noting that unlike some competitor rifles, all PGW rifles come standard with brakes.

The APA Little Bastard scored really well on Cal Zant’s tests – it was after reading his article that I chose this brake for installation on my Chou Brothers Custom 6.5-47L build -and mine also works well but, though it fits using a locking nut, mine actually came loose over the winter and needed to be Loctite refitted.  I’ve heard others have had similar problems with these brakes so I’d recommend Loctite from the beginning.  Probably the best in reduction of felt recoil this recoil reduction comes at a price – it is LOUD !  Yep, really LOUD.  If you shoot at a public range be prepared for some looks and, spoiler alert, they won’t be looks of admiration.  Good ability to stay on target and seemed a bit better than the PGW when it came to dust disturbance. 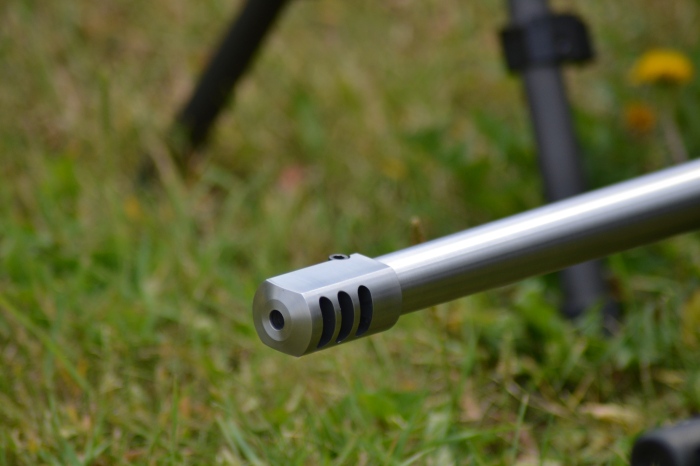 I like the looks of this brake a lot and have another one on a 7mm ( they come in 6.5 or 30 caliber so, remember, a 7mm will require a boring out if the 6.5 is purchased ).  The easiest to install and remove as only one bolt is required to be loosened and snugged up.  Cuts recoil down by roughly half and only seems to increase noise a bit.  Good tracking and dust disturbance results.

Seemingly similar in design to the APA Little Bastard, I was worried it would be equally loud but – pleasingly – it is not so.  It cuts recoil in half just like the APA but without the crushing noise increase – if I knew the first thing about engineering I could offer an explanation but alas my schooling in Tort, Contract and such things is of no help to me in explaining the mysteries of why one brake is too loud and another is more moderate.  I am also pleased to say that unlike my APA this one hasn’t shown any sign of coming loose even though I tried it and its aluminum brother ( more on that below ) without Loctite.

Installing and uninstalling like the APA with a locking nut there the Heathen has the Insite Arms logo on top and the caliber number on a flat spot on the bottom.  These markings  usefully help alignment as well as provide information (caliber) and some aesthetically pleasing brand identifier.

Insite Logo on the top of the Heathen

Of course the 6xc test rifle is heavy and the 6xc is a soft cartridge but the Heathen does help with follow up shots and staying on target and the dust signature also was good.  Overall, I am impressed with the Heathen – Canadian made, it comes with nice packaging and proper, easy to read instructions (to compare, the Benchmark comes in a plastic bag).

On the advice of Insite ( who did promise me an exchange if I did not like it ) I ordered the new aluminum version of the Heathen to replace the APA.  I’m pleased to say that it works just like the steel one on my 6xc and looks the same except maybe it is shinier.  It is certainly lighter for those for whom rifle weight is an issue.  I have to say I like it and it has replaced the APA so maybe my ears ( and my neighbours ) like it too.

Replacing the APA – The all-aluminum Heathen in 6.5 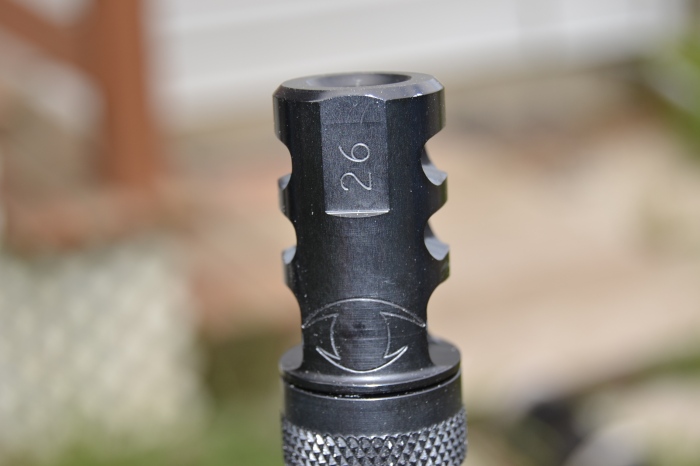 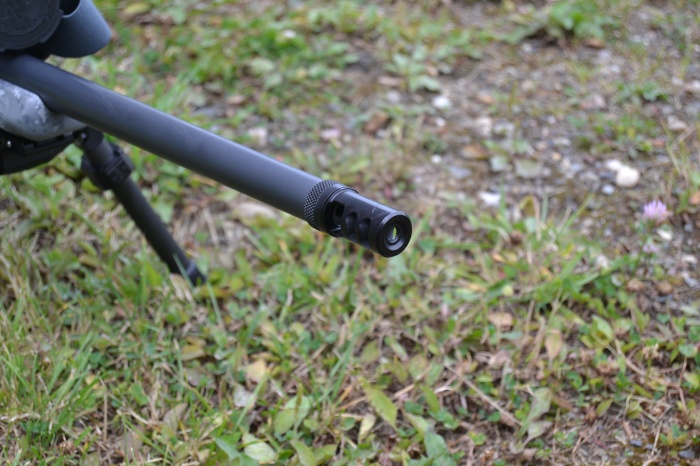 In conclusion I say that if you – like me – prefer a rifle to wear a brake to cut down on recoil and also you are looking for something that you can use at the range without everyone wishing you would go home then I recommend the Heathen be on your short-list of choices.  Available from Insite Arms at : https://www.insitearms.com/product/the-heathen-muzzle-brake/