Last year I commissioned the build of a Surgeon in 6.5-47 from well known Canadian builders Chou Bros Precision and wrote a detailed review which can be found here:  https://rifletalk.org/2017/02/11/custom-6-5x47l-precision-rifle-build/  and while I love this rifle its coloring really is best suited to the Winter and since I actually do have a Summer – albeit a short one – a rifle colored for Summer conditions seemed entirely in order.  For this build I chose to engage the services of another well-known Canadian outfit: Insite Arms out of Lloydminster Alberta who self-describe as follows “We are a small rifle shop. We build each rifle 1 at a time. We guarantee that the rifle we build for you will be one of the most precise, consistent and therefore accurate rifles you own. A quality precision rifle is a large investment and we understand uncompromising expectations” and who can be found online at: https://www.insitearms.com/

One interesting factoid about the folks at Insite Arms is that they have been helped and trained by the very well-respected US Gunsmith Mr. Robert Gradous whose rifles are amongst the most sought after South of the border.

The 6XC – Much More Suited For Summer

Unlike many gunsmiths in Canada who and for any number of likely good reasons require the buyer to accumulate all the components him or her self, Insite are happy to be your “one stop shop” and they keep an excellent selection of parts and materials on hand from which a potential buyer may choose to have a rifle built from. I was totally happy to take full advantage of Insite having a supply of parts in stock and simply asked them to use the parts I wanted and build me a rifle – so very smooth and something that US readers, likely unused to the difficulties Canadians face in regard to sourcing components for a rifle build, may not readily appreciate !

I chose this rifle to be made in 6XC partly because I have pretty much most calibers from .223 to .338L but more importantly because of its reputation as an inherently accurate round for the paper punching that this rifle will be used for.  The 6XC is as many will know a David Tubbs design and has the ballistics of a .243 but does so with less powder and therefore has a much longer barrel life.  So, soft shooting with good ballistics and a ready supply of excellent projectiles – what more can a person ask for.

For this particular rifle I wished to stick with three of my favorite ingredients for a custom gun   – I wanted to use the Surgeon 591 action, the McMillan A5 stock and the simple-but-reliable Timney 510 trigger but – on the recommendation of Insite who had seen great results out of a number of their other builds – I allowed myself to be persuaded to try a new barrel maker; Hawk Hills and, as we will see later, I couldn’t be happier.

Heart of a Rifle – A Good Action 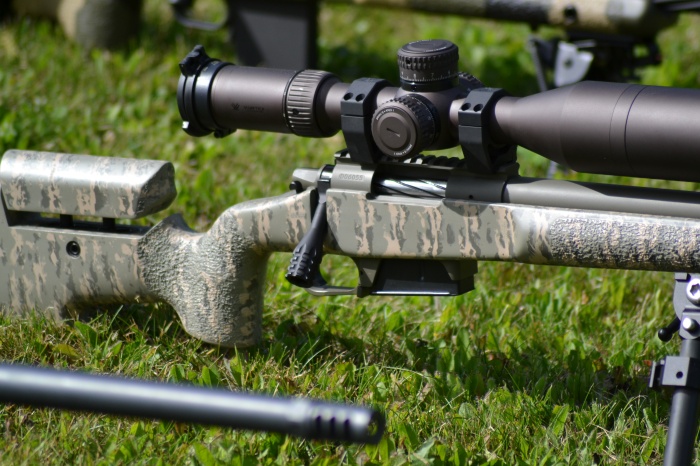 While most of my custom rifles use the Badger DBM with one using a PTG and one using a Seekins this time around I chose this time to use Surgeon bottom metal – partly for looks, partly for consistency with the action and partly because it is an ambidextrous release and a funneled magwell.  Originally designed by Terry Cross it is clearly a quality piece of equipment and so far I like it – a lot.

As far as a stock was concerned, I will readily admit to being a real fan of the McMillan stocks – for me they are amongst the very best of the traditional type stocks and while many people like the Manners stocks (and I’m sure they are very good) since I’ve never been disappointed with a McMillan I see no reason to change.  I wanted a pattern that would complement the Urban Spectre pattern on my 6.5-47L “Winter Rifle” and so I chose for this rifle the Woodland Spectre and, yes, Insite Arms had it in stock !  A real nice looking camo that looks the way I envisioned it to look.

As mentioned, it was upon the recommendation of Insite that I chose Hawk Hills as a barrel supplier and my only ask was that the profile be M40 as that is my favorite look for a barrel on a rifle where weight isn’t a consideration.  At this juncture I should say that Insite were really excellent in checking in with me as a customer on issues like weight and expressed concern that if this were for a PRS rig I may have gone too heavy.  Of course this rifle is for lying down on my belly and I couldn’t care if the thing weighs 50 lbs but the service and checking -in were really most appreciated.  (Note, finished the rifle weighs 21 lbs with the Vortex Razor II ).  I decided to add a brake even though such a thing on a soft cartridge isn’t at all necessary and I chose to use the Insite manufactured ‘Heathen’ brake.  This brake – which will be the subject of a separate article – is excellent and works as well as the APA Little Bastard without the crushing noise level !

At the end of the day the fit and finish of the rifle I had built by Insite was simply impeccable – and I’m very picky about such things – with no flaw at all to be found but as nice as a rifle looks the real test is accuracy and in this regard the folks at Insite have built a real tack driver: test fired before it arrived it produced a one ragged hole at 100 meters for fifteen (yes, fifteen) shots and when I took it out it has consistently shot into the .3’s at my load development distance of 200 meters.  Seriously, this is an excellent shooting rifle.

To say I’m pleased with the work Insite Arms did in putting together this rifle would be an understatement – they were excellent to work with an have produced for me exactly what I wanted in a very acceptable timeframe (Feb- Jun) and within the budget they quoted.  I would strongly recommend anyone interested in having a real tack driver built consult with Insite Arms – you will not be disappointed.