I know that the first question that comes to mind when seeing the title of this review is “That scope is so well known why bother writing a review ?” Well, yes, I agree – the S+B 5-25×56 Pmii (short for Police Marksman ii ) has been around for quite a few years and it’s hard to write anything new about it but I figured that it wouldn’t hurt the shooting world to have another opinion out there – especially from an end user who paid retail; isn’t in the business of selling scopes and isn’t one of those shooters beholden to any sponsorship deal or anything like that.

Schmidt and Bender, commonly known as S+B, ( http://www.schmidtundbender.de/en/ ) is a German riflescope manufacturer that has been in business since 1957.  Unique amongst similar companies S+B have only one product line – scopes (and a few small accessories like sunshades and covers) – they don’t sell rings, bases, binoculars or spotters and, no, you can’t even get a T-Shirt off them and, unlike some other companies (Vortex and Nightforce come to mind),  that are seen to really embrace the shooting community it sometimes seems as though S+B is oblivious as to what competitive or recreational shooters want.  Finally, S+B doesn’t try to get market share through offering cheap entry level product lines and doesn’t make a big show of its warranty program.

Now before continuing with the review of the scope, I should say that I suppose I am biased about S+B scopes and I’m on record here and elsewhere as saying that S+B makes some superb glass but I’ve formed my opinion after owning a couple of the 12-50×56 Pm ii SFP scopes and looking through a number of other S+B’s at ranges days and matches.  All to say that my hopes were very high that the 5-25×56 Pm ii would not disappoint.

Readers who have read my previous reviews and commentaries will recall that because I’m a F-Class competitor  and only a recreational LR tactical rifle shooter, nearly all my shooting is done at known distance.  If I don’t know the distance to a particular target I  have time to use a range finder and I dial rather than hold off so, not surprisingly, my traditional preference (and need) is for higher magnification SFP scopes.  Recently though I decided that with the components for a 6.5×47 tactical rifle in with my gunsmith,  I might want to try my hand at some PRS type of shooting and so a FFP scope would be a very useful addition to the collection of available glass.

Having made the decision to use a FFP scope I decided to buy one of the better known and highest quality scopes available and at day’s end my choice came down to two – the Vortex Razor Gen II 2 4.5-27×56 and the S+B 5-25×56 – I would have very much liked to say that the Tangent Theta was also in consideration ( I reviewed this scope earlier in the year ) but the TT basically excluded itself on price; one has to draw a line somewhere and mine was South of the TT retail.

What finally led to me choosing S+B over Vortex came down to a number of things: price was surprisingly comparable because I had an excellent deal on the Schmidt and, honestly, with recent price raises I now think the Razor to be a bit over-priced, I also worried that at over 4lbs the Razor is also a bit too heavy and while Vortex’s warranty is awesome the fact is that a LOT of people use that warranty.  What I paid little attention to was a controversial review out there that suggests the Vortex glass suffers at max elevation. In my mind the only real de-merit to the S+B was the issue of tunneling from 7x down to 5x but since it is most unlikely I’d be using the scope at those magnifications it really wasn’t an issue for me.

I decided to buy the S+B from Wolverine Supplies which is a  well-known Canadian firearms retailer located in Manitoba and is the Canadian distributor for S+B( https://www.wolverinesupplies.com/). I’ve always enjoyed dealing with Wolverine and  I’ve bought both of my two other S+B scopes from them as well as a number of other items and can say that they are a totally professional outfit whose staff are knowledgeable and who have excellent customer service.

For those whose reading of a review is enhanced by such things, the specs on the the S+B 5-25×56 Pm ii can be found here: http://www.schmidtundbender.de/en/products/police-and-military-forces/5-25×56-pm-iilp.html

Besides having FFP, the features I wanted on my new scope were mil/mil turrets with the double turn feature and counter clockwise turns to ensure consistency with my other scopes.  I did not want the MTC ( More Tactile Click ) turrets as I simply don’t like them and while I could have ( for a few hundred dollars more ) had the scope equipped with the excellent Horus reticle I chose the S+B P4 Fine reticle  which is what I have on my other S+B scopes and which while not as fancy as some others out there is one I am used to and one that, for me at least, does everything I want it to do. 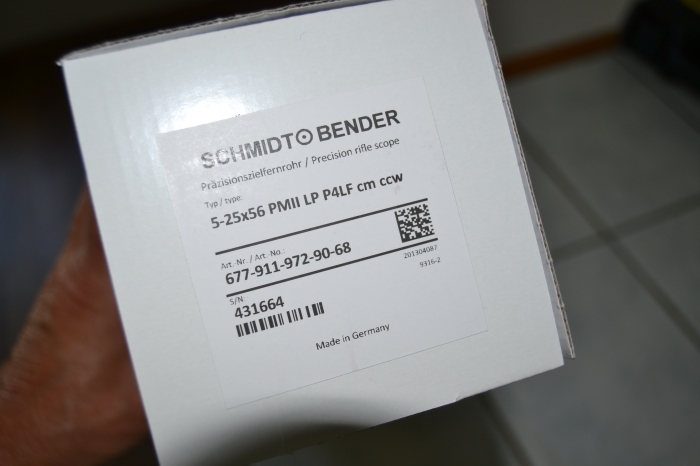 Promptly mailed by Wolverine,  my scope arrived at my home while I was away on a training course but immediately upon my return I, just like every other Gunnie out there,  eagerly unboxed the new toy.  Perhaps surprisingly in today’s day and age the packaging of such a fine instrument isn’t accompanied by much in the way of fancy stuff.  The box is pretty plain and other than the addition of Butler Creek caps the scopes comes with nothing other than an owners manual and warranty registration card – no nice stickers, pins or (more importantly) a sunshade from our German friends.

Fit and finish of the S+B was flawless – there really isn’t any other word for it – and all the controls worked in the crisp, precise way that people associate with fine engineering but it was the glass that surprised me; I’d read elsewhere that the 5-25 was considered by others (notably Cal Zant of the Precision Rifle Blog) to be the pick of S+B’s litter and, yes, I agree as the glass on this model does seem super sharp and crisp.  Sadly, there is no really objective way to tell such things but, using eyeball Mk I, I think it better than the already excellent glass found on the 12-50 Pm ii and that is saying something.

In my opinion while the turrets on the S+B are excellent they are still not as nice as the turrets found on the TT who really have taken turret feel to the next level.  As for feel, and while this is all personal preference, I do think a user could consider the clicks to feel a bit ‘close together’ so, at speed or under stress, a user may worry that they might unintentionally dial in too much adjustment.  In my experience these kinds of issues go away as one gets used to a particular scope and I’ve never found -even under the stress of match conditions – that I’ve had a problem with the S+B turrets which adjust at 3.8 inch pounds per click.

One of the turrets features I really do like is the Double Turn – when on the second rotation a yellow indicator pops up in the turret cap (see pic above) to tell you that the turrets is on rotation two – a handy feature and one that stops you getting lost on the turret. Another turret feature I really like on the S+B is that the numbers are easy to read – this becomes more important when, like me, you have more grey hair and use reading glasses ! 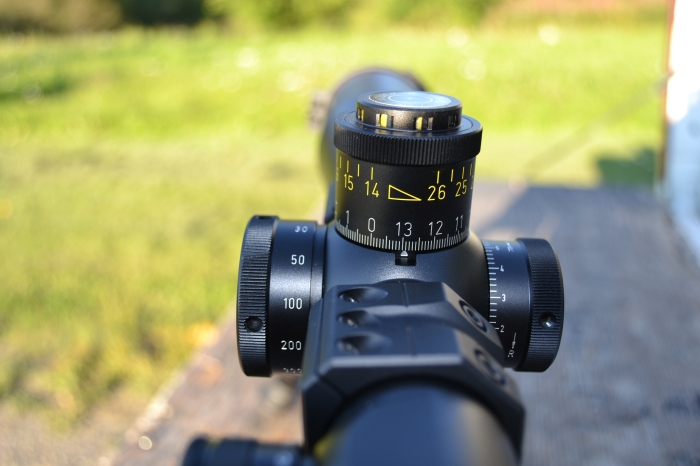 Like many other tactical scopes the 5-25×56 S+B comes with an illuminated reticle which, quite honestly, isn’t a feature I don’t really ever use but I am sure others do.  On this model the adjustment is off to the left just in front of the ocular and it is easy to use simply illuminating (in red) the central cross of the P4 reticle.

Others online have commented that there isn’t an ‘off’ between the graduations ( you have to return to 0 for the illumination to be off ) but other than noting this I can’t say that I see it to be an issue.

The magnification ring turns smoothly and there is no loss of clarity at magnification at all.  Of course, being a FFP scope the reticle subtends are accurate at all ranges throughout the magnification range.  Eye relief is also consistent throughout the range and to my eyes at least this is an easy scope to get behind but it should be noted that there isn’t a huge amount of room on the scope to move it between the rings or mount and so you may find you have to move the rings or mount along the rail to get yourself properly positioned. 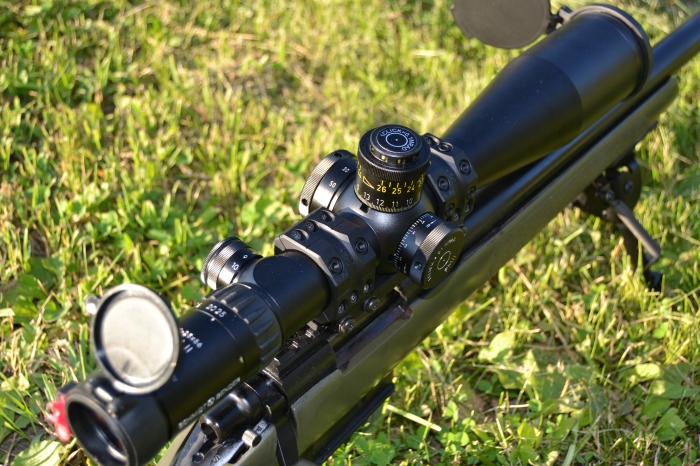 Taking this scope out to the filed over a couple of days,  running the turrets hard, shooting at different distances and shooting in really heavy mirage and, later in the day, in poor light confirmed why this scope is considered to be one of the best ( if not the very best ) scopes of its type out there – of course the controls are responsive and repeatable but it is the image quality that I found to be excellent and what to my eyes really makes the scope stand out.  So good is the S+B that one particular afternoon while looking at the target some 350 meters away through my otherwise excellent Nightforce NSX  the mirage was so heavy that it would normally have signaled the end of the session but switching over to the S+B allowed for the target to be seen with clarity and therefore shooting could meaningfully be continued.

Clearly the S+B 5-25×56  is an expensive item and a scope like this will not be for everyone’s need or budget – indeed others may argue that the new Vortex Razor or the Tangent Theta have eclipsed it – but my feeling is that S+B remains hard to beat and I very much doubt that anyone will be disappointed owning one of these truly fine riflescopes.

Update:  I have recently purchased the Vortex 4.5-27×56. My review is posted and honestly I was very, very impressed – it gives up a little in the glass department to this S+B but the other features are actually better.  Review is here: https://rifletalk.org/2016/08/26/review-vortex-razor-hd-ii-4-5-27×56/ 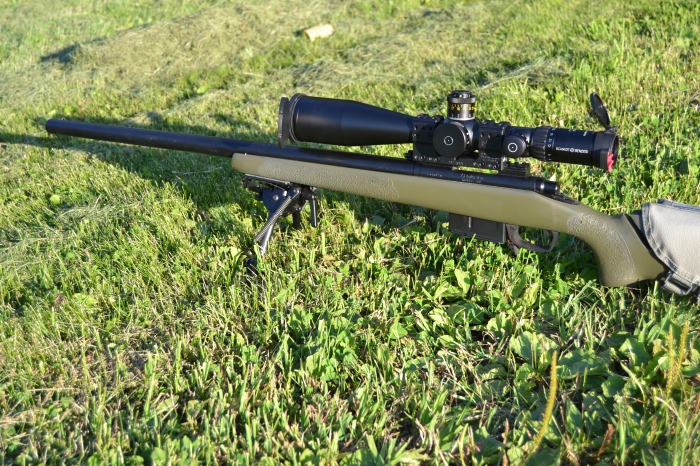