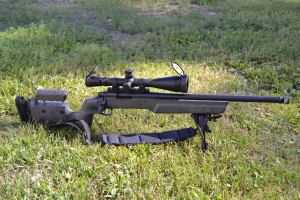 A while back I traded a M14 shorty for a bone-stock and hardly used Remington AAC-SD. I was happy to make the trade since my LRB is the go-to M14-type rifle and, while I have lots of bolt guns, I always have a soft spot from the offerings from Big Green and the bed-wetting over the tort lawyer inspired trigger recall didn’t worry me one bit.

While I’d owned SPS’ before – at least until they got made into custom rifles – this rifle happened to be my first AAC-SD and I figured that while the barrel was a little heavy for a hunter the weight gained by thickness was offset by the reduced, 20″, length so a spare hunting rifle it was going to be and I thought no more of it.

Shortly after the decision to set aside the AAC-SD was made another trade occurred which changed my plans – I traded away a very nice Savage 10FP tactical package for a Ruger Gunsite Scout.Well, actually, the Ruger Scout isn’t the Gunsite model as it has the 18″ rather than 16″ barrel but that’s not important – what was important about this trade is that it got me thinking that the Ruger ( with, of course, a hunting-legal five round magazine ) would be a much, much better choice for a hunter over the AAC-SD.So, what to do with the Remington ?

I am retired now so funds are more of an issue than before and I’ve also got lots of full custom rifles but I thought “I wonder what cosmetic and practical improvements I can make to this rifle to enhance its role as a tactical precision tool?”As I thought the issue through, I decided that I wouldn’t do anything which required sending the rifle off the property to a gunsmith and I wouldn’t go wild on the expense.With those decisions in mind I needed to ascertain if the Remington would shoot – if it failed that most basic of tests then all bets were off.

On a suitable day I took the bone stock Remington to the hayfield where I do most of my shooting and with the hunting scope I’d borrowed of my 30-06 (Zeiss Conquest 3-9) all mounted up I established a zero and shot for groups at 100, 200 and 300. I used FGMM in the 175 weight as I figure that if a .308 don’t shoot this stuff well then it ain’t shooting anything.Happily this rifle is a shooter – no half-MOA or anything like that but without too much effort I was getting groups at 100 and 200 which came in all around one minute with some a bit smaller and some a bit larger.At 300 the groups spread out a bit more but I am prepared to accept that failing was me – a 3-9 hunting scope, even one of the Zeiss quality, isn’t enough for my eyes to consistently use well enough to produce good results as the yardage increases.

With an acceptable standard of accuracy established I went to work.The first thing than needed a change was the overall finish of the rifle; I understand that Remington builds this model to a price point but, at least to my eyes, I find the metal work to look rough so a complete strip down of the rifle was followed by the application of a new finish.Since cost was a consideration I went with a high heat paint finish out of a spray can.I know some people think this to be a ‘bubba’ thing to do but, in my opinion, repainting metalwork is a job that can be done poorly or you can take your time and do it properly; the beauty of being retired is that I have nothing but time and I was well-pleased with the end result and the appearance of the rifle is improved.

The painting was my only concession to the rifles cosmetic appearance and with that being attended to it was on to real practical improvements.I’ve said before that I’m likely in a minority because I actually think the Remington X-Mark Pro trigger to be OK, but my view of the XMP doesn’t mean that I don’t like aftermarket triggers more and so the search for a suitable replacement began.Well, finding a R700 replacement trigger in the midst of the biggest trigger recall in history was a challenge but I did find a source for the very acceptable Timney 510 and so one was installed to replace the XMP.

This is a straight forward job and simply involves gently taping ot some pins and carefully replacing the factory unit with the aftermarket one.RTFM and don’t loose any pieces and you will be fine.

Next up was a replacement for the factory stock – while these factory stocks actually feel quite nice and have a sort of rubberised texture that I feel would be great in wet weather, I don’t feel that they are stiff enough for the best possible, consistent, accuracy.I had a very nice HS Precision stock on hand that was a take off from my Remington R5 but I find the HS Precision pistol grip about 1/4″ short for me and I also wanted something with a few more features.

I have had a number of the very fine McMillian A5 stocks on custom rigs and really like them but they are pricey and I couldn’t spring for such a stock on a lower-end rifle like this so I settled on the Bell + Carlson version of the A5.Now I am not going to say that B+C stocks are as good as McMillian but I will say that they are every bit as god as HS Precision and represent a tremendous value being that they are about half the price of the McMillian.Just like the McM stock the B+C A5 has a full length bedding block and has two features that I think are better than the much more expensive McMillian; a better pistol grip for my hand and a milled-in Anschutz type rail.A fully adjustable stock and a properly adjustable comb ( rather than the fugly saddle ) round out the features.

B+C advertises their stocks as a true drop-in for the Remington 700 and this was as close as close can be – I did use a dowel wrapped in sandpaper to make it 100% perfect but it was millimetre-close to start with.I should add a note on stock fitting for the newbies out there: please avoid the temptation to use the Dremel tool as it is way too easy to remove too much material and once removed it be one sumofabiatch to add it back in 🙂

One interesting observation about the B+C tactical stocks is this: the M40 style has a barrel channel easily big enough to accommodate all the Remington profile barrels including the R5 – whereas the A5 stock would need to have the barrel channel hogged out a bit to achieve a fit for a R5.I found that a bit odd given that they come from the same manufacturer and I suppose it is no biggie since the work would be easy enough to do with a 1″ dowel wrapped in sandpaper but it’s good to know before making a purchase.

So now that the rifle was newly triggered and properly bedded down into a quality stock there wasn’t too much more to do really but I do have a couple of pet peeves about rifles that I needed to address.Firstly, I personally like a tactical rifle to have a decent quality picatinny rail attached to the receiver and I like it to have at least a 20 MOA cant so that I have sme flexibility re my choice of optics.The AAC-SD came to my hands with a rail (I think they come from the factory so installed) but it looked to be 0 MOA and so off it came and a nice new Talley 20 MOA rail took its place.On a premier build I would have looked at NF or comparable but for this rifle I figured that the Talley was more than adequate.Next up on my list of peeves was the bolt knob – on a hunting rifle there is nothing whatsoever wrong with the stock Remington bolt knob and, quite honestly, for 99.9% of us there is nothing wrong with it for a tactical rifle either but, like I say, it is a pet peeve of mine.Since I wanted to avoid paying for work to be done and limited in what I can do myself I eschewed the traditional oversized bolt knobs and chose, instead, to go with the KSG replacement which is very handily carried by our friends at MDT.Beyond easy to install, fitting perfectly and looking good this was a great choice.

Modern thinking suggests that a true tactical rifle simply must have a detachable mag system and when starting out on this adventure I planned to use one but I didn’t want to send the stock off for inletting and the only true drop in for the Bell and Carlson is the Wyatt system which I think it quite good but it uses proprietary single stack mags and the ten rounders are something like six inches long which, at least for me, will interfere with my prone positioning.So, with Wyatt off the table and not wanting to pay for inletting I decided to go the simplest route possible – leave the floorplate as it is because this rifle is never ever going to see competition as both my PGW Coyote and my Custom Remington/AICS rigs have full-on detachable mag systems with a number of spare mags so I’m well equipped in that department as it is.

The final step in the transformation of this rifle was the addition of some decent glass.I’d picked up a Leupold 8.5-25×50 a while back and it was sort of an orphan scope for a while and so that worked perfectly for this project.Attached to the rail with a nice pair of Leupold 30mm QD rings I was good to go.

Of course now it is complete I will be looking to trade it away for something else to pass the time. Maybe I really should go back to work !